The Deployment Life Cycle of the Military Family: Implications for Health Care Providers

This training provides military and civilian health care providers with information about how military families can be impacted by a service member's deployment.  Recently published research on the deployment life cycle of the military family will be presented along with ways to use the research to inform practice.  Resources for families will be discussed with a focus on the National Military Family Association.

Information obtained in this course should be used within your scope of practice.

CE Information is based on 100% attendance.

This self-study course has been approved by PESI, Inc., as a NAADAC Approved Education Provider, for 1.0 CE in the skill group. NAADAC Provider #77553. PESI, Inc. is responsible for all aspects of their programming. Full attendance is required; no partial credit will be awarded for partial attendance.

This self-study activity consists of 1.0 clock hours of continuing education instruction. Credit requirements and approvals vary per state board regulations. Please save the course outline, the certificate of completion you receive from the activity and contact your state board or organization to determine specific filing requirements.

This self-study activity consists of 1.0 clock hours of continuing education instruction. Credit requirements and approvals vary per state board regulations. Please save this course outline, the certificate of completion you receive from this self-study activity and contact your state board or organization to determine specific filing requirements.

This activity meets the criteria for an American Nurses Credentialing Center (ANCC) Activity. PESI, Inc. is an approved provider by the American Psychological Association, which is recognized by the ANCC for behavioral health related activities.

This self-study activity qualifies for 1.0 continuing education clock hours as required by many national, state and local licensing boards and professional organizations. Save your activity advertisement and certificate of completion, and contact your own board or organization for specific requirements. 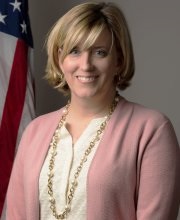 April Thompson, LCSW, is a clinical social worker currently working as a Cognitive Behavioral Therapy Trainer with the Center for Deployment Psychology (CDP) at the Uniformed Services University of Health Sciences (USU) in Bethesda, Maryland.  In this capacity, she is responsible for the development and delivery of both live and web-based trainings to military and civilian mental health providers on deployment-related topics.

Ms. Thompson received her Bachelor of Arts degree from Pepperdine University in Malibu, CA and her Master of Social Work degree from University of Pennsylvania.

For over 20 years, Ms. Thompson has specialized in military child and family issues especially in the area of domestic violence and family maltreatment prevention, response and treatment.  She has worked as a clinical counselor on military bases in Japan, Florida, Virginia and Hawaii.  Prior to joining CDP, Ms. Thompson was a clinical care coordinator overseeing the training and quality control of clinical documentation for contracted counselors working at Navy bases throughout the continental United States.

Financial: April Thompson is employed by Center for Deployment Psychology.

Non-financial: April Thompson has no relevant non-financial relationships to disclose.

Joyce became the Executive Director of the National Military Family Association in 2007. In that position, she leads the Association’s programs and initiatives to meet the needs of the families of the seven Uniformed Services and promote improvements in their quality of life. She is frequently called on by government officials, other organizations, and the press to share her expertise on the issues facing military families. She began her work with the Association in 1995 as a Volunteer in the Government Relations Department and subsequently served in various staff positions, including Government Relations Director.

Joyce has represented military families on several committees and task forces for offices and agencies of the Department of Defense (DoD) and military Services. Joyce has served on several committees of The Military Coalition, an organization of 36 military -related associations. She was co-chair of the Coalition’s Personnel, Compensation, and Commissaries Committee from 2000 to 2007. In 1999 and 2000, she served on a Congressionally-mandated Federal Advisory Panel on DoD Health Care Quality Initiatives. From June 1999 to June 2001, Joyce served on the first national Board of Directors for the Military Child Education Coalition. In 2004, she authored a chapter on “Transforming Support to Military Families and Communities” in a book published by the MIT Press, Filling the Ranks: Transforming the U.S. Military Personnel System. In 2015, she was selected as a member of the Millennium Cohort Program Strategic Board.

In 2006, Joyce received the Gettysburg College Distinguished Alumni Award. She was the 1997 recipient of NMFA’s Margaret Vinson Hallgren Award for her advocacy on behalf of military families. She also received the “Champion for Children” award from the Military Impacted Schools Association in 1998. In 2007, Military Spouse Magazine listed her on its Who’s Who of Military Spouses. On May 29, 2012, she was honored as a Daily Point of Light by the Points of Light Foundation. In 2014, she received the Community Hero Award from the PenFed Foundation.

A Maryland native, Joyce earned a B.A. in History from Gettysburg College, and a M.A. in History from the University of Virginia. The spouse of an Army retiree, she is the mother of two adult children. She is a former teacher and served on the Fort Knox Community Schools Board of Education from 1993 to 1995. She was an active volunteer parent in her children’s schools. She plays hand bells and sings in her church choir and the Northern Virginia Chorale.

Nonfinancial: Joyce Raezer has no relevant nonfinancial relationship to disclose

Thomas Trail, Ph.D., is a Behavioral Scientist at the RAND Corporation. His research focuses on interpersonal relationships, including between spouses, friends, and group members, with a particular focus is on how stress affects relationship processes and health outcomes. Recent research includes investigating family readiness across the deployment cycle (the Deployment Life Study); the potential impact of integrating women into USMC combat roles on unit cohesion; and investigating the effectiveness of online communities for improving the health and well-being of military caregivers. Prior to joining RAND, Thomas was a postdoctoral scholar at UCLA. He received his PhD in social psychology from Princeton University and his MS in applied/experimental psychology from Virginia Tech.

Financial: Thomas Trail receives compensation from a salary at RAND Corp and grants from US Department of Defense.

Nonfinancial: Thomas Trail has no relevant nonfinancial relationship to disclose

Benjamin Karney is a Professor of Social Psychology at the University of California, Los Angeles, and an adjunct behavioral scientist at the RAND Corporation.  His research examines interpersonal relationships, especially marriage, and focuses on how relationship processes and interactions are facilitated or constrained by the contexts in which they take place.  Currently, he leads the Los Angeles Project on Newlywed Development (LAPOND), a longitudinal study of low-income couples, and co-directs (with Thomas Bradbury) the UCLA Relationship Institute. He has also consulted on the Strengthening Healthy Marriage project, a national experimental study of marital interventions for low-income populations, sponsored by the Administration on Children and Families.  He has twice been the recipient of the National Council on Family Relation’s Reuben Hill Research and Theory Award for outstanding contributions to family science.

Financial: Benjamin Karney has no relevant financial relationship to disclose

Nonfinancial: Benjamin Karney has no relevant nonfinancial relationship to disclose

We would be happy to accommodate your ADA needs; please call the Center for Deployment Psychology at 301-400-4160 or email mnorgard@deploymentpsych.org